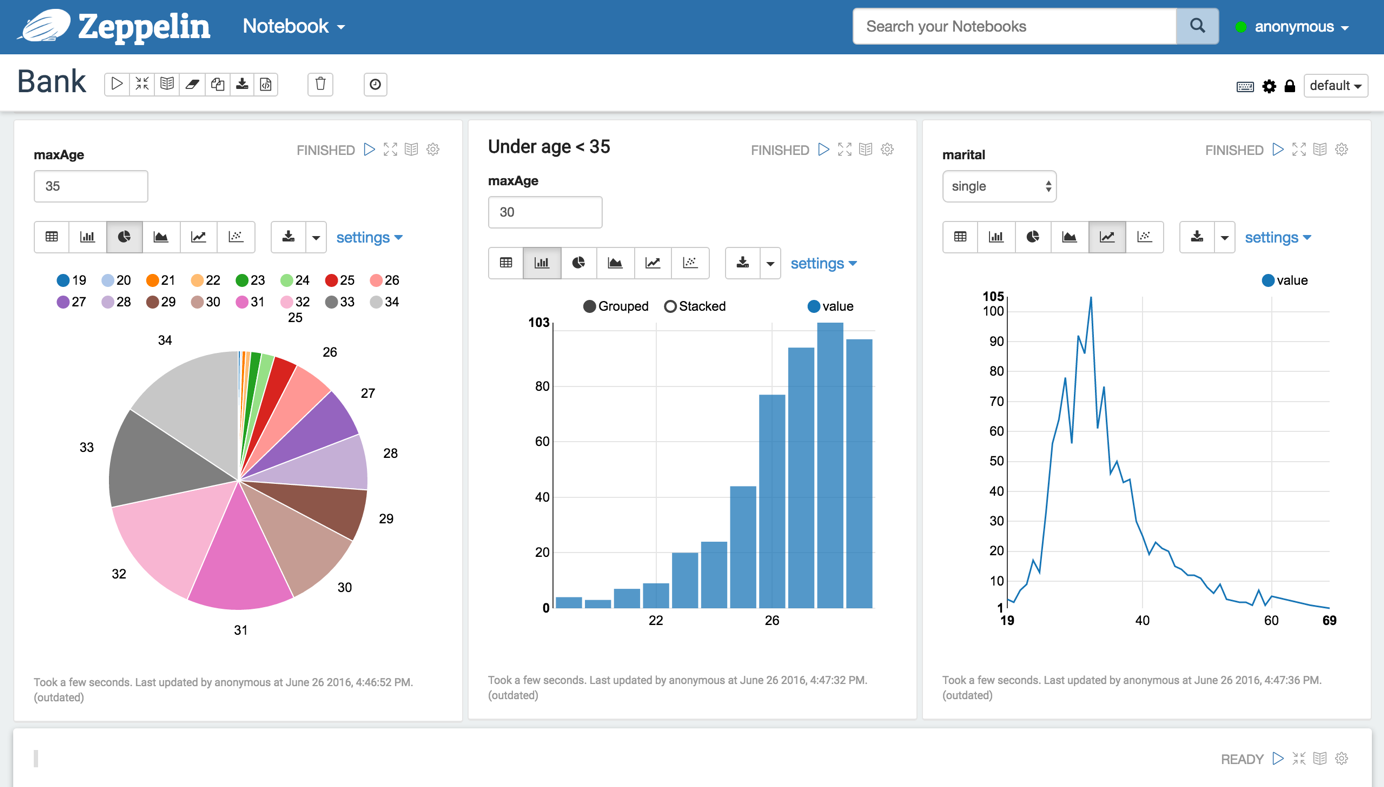 I consider Zeppelin becoming a great piece in my toolbox when it comes to doing proof of concept projects. Most of this PoC work is focussing on graph database modelling and importing data from any kinds of formats. Of course the real value is not in having data in a graph database on its own but instead doing “something” with it. In a lot of cases visualization is the “something” and finally proves the value of the concept. Since my javascript skills are rather poor compared to good old java, I typically spend more time than needed to work on visualizations. With Zeppelin this hopefully increases my productivity since basic visualizations come out of the box.

Download the most recent binary Zeppelin package with all interpreters included from https://zeppelin.apache.org/download.html and extract the tgz archive. Start up Zeppelin using `bin/zeppelin-daemon.sh start` and connect your webbrowser to `http://localhost:8080`

To configure a Neo4j datasource go to the dropdown nearby “anonymous” in the title bar, go to “Interpreter”. Use the “+Create” button on the upper right corner. First select “jdbc” in interpreter group and fill out the values according to this screenshot – you can delete the other options. Please note that you don’t need to download the neo4j-jdbc driver manually, Zeppelin will fetch it from maven central if you supply `org.neo4j:neo4j-jdbc-bolt:3.0.1` for artifact.

Now it’s time to access Neo4j from a Zeppelin note. Create a new note by choosing “Create new note” from the “Notebook” drop down at the header line. You need to go to the gear-wheel icon on the top right “Interpreter bindings”. Be sure to enable “neo4j %jdbc”: When done, you can run a Cypher query using the following notation:

Some notes on this: Zeppelin does not a feature to display nodes and relationships, so a graph view would be nice. If I find some time I wanted to investigate on this – maybe we can come up with a even more rich integration.

Thanks to a feedback tweet on this post (thanks Andrea !), I’ve learned that there’s a pending pull request for a better Neo4j integration in Zeppelin. I have not yet tried it, but there is some network style visualization based on sigma.js included. Database access to Neo4j is not relying on JDBC as in my approach, but uses the bolt driver directly under the hoods.